A record winter in the Alps has kept the safety officers in charge of traffic routes and ski areas on alert throughout the winter season. In the 2017/18 season, the highest avalanche warning level 5 was issued in Austria for the first time since the avalanche winter of 1999, and the winter of 2018/19 was no different from its predecessor. Persistent precipitation in record-breaking quantities caused extreme avalanche danger in many places and many roads were closed for days in certain areas. The Wyssen Avalanche Control systems withstood the extreme situation perfectly and made an important contribution to avalanche safety in ski resorts and the availability of important traffic routes.

The safety officers of Kühtai (Austria) and Davos (Switzerland) review the eventful winter.

Kühtai (AT) is a popular holiday resort and has a lot to offer in terms of activities.

Those regions that had prepared themselves for such huge amounts of snow in the last 20 years since the catastrophic winter of 1999 handled this year’s snow falls in a calm way. The winter sport resort of Kühtai in Tyrol is situated at 2,000 meters above sea level and, as a result, both access roads are potentially endangered by avalanches due to their high alpine location. As early as 2013, an avalanche path that endangers the western access road has been secured with Wyssen avalanche towers, and just in time for January 2019, one of the most dangerous avalanche paths on the eastern access road was secured last fall as well. In the course of the new construction, the existing systems were also converted to the new WAC.3® control and user interface. Willi Mareiler (Operations Manager of Bergbahnen Kühtai and Chairman of the Avalanche Commission) is convinced after this first major test that avalanche towers from Wyssen Avalanche Control and the innovative WAC.3® user interface are the right choice. The preventive release of avalanches made it possible for these sections of the road to remain open during the heavy snowfall this January. With the new WAC.3® user interface, the work of the authorized explosives experts has also been made much easier and it is now possible to obtain an overview of all systems much more quickly and to trigger several avalanche towers simultaneously, thus reducing the necessary road closure times even further.

Read more about the project in Kühtai (AT): 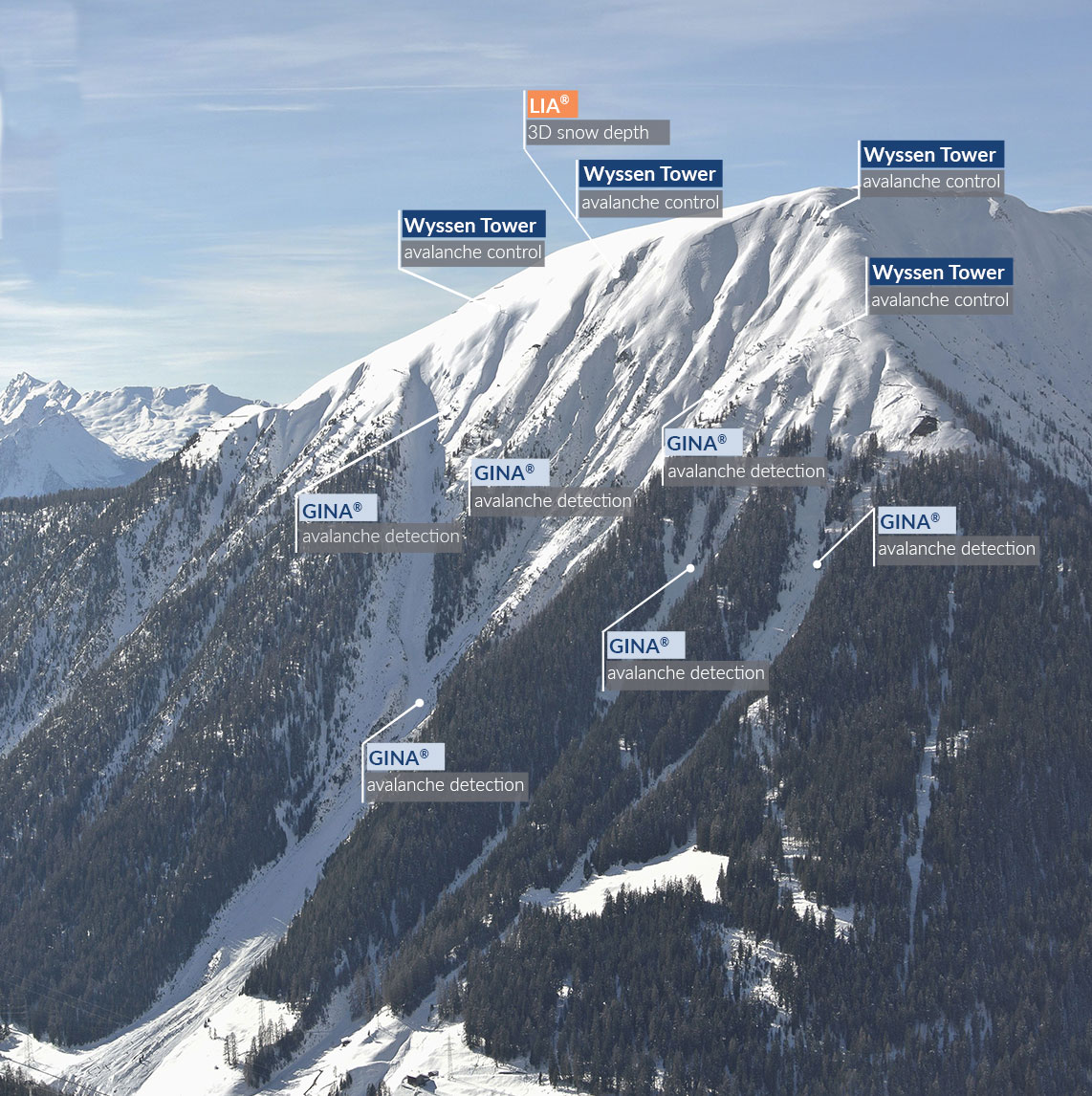 Davos is widely known as a city of international importance and is visited by numerous tourists every year.

Integration of multiple solutions secures the access roads to Davos

Davos is widely known as a city of international importance in the middle of the Swiss Alps. In addition to the numerous tourists who visit the town every year, Davos is also a venue for international events, such as the World Economic Forum. Therefore a reliable road and railway connection that operates all year, independent of time of day and weather conditions, is imperative! A perfect integration of different systems allowed to minimize road closures during the winter season 18/19 and ensured safety for all parties.

Our solution: Integration of multiple solutions

Four Wyssen Avalanche towers were installed in the release areas of Breitzug in the summer of 2018. They have been used with great success in the winter of 2018/19 and have already allowed the local avalanche control team to release avalanches in a controlled way during the intense snow fall periods.

As an additional decision-making tool a LIA® Laser scanner was installed on one of the Wyssen towers. Every hour LIA® creates a 3D scan of the snow height (radius of 40 m / 130 ft around the tower) and provides detailed and valuable information to the control team from exactly where it is needed – the avalanche release area. After a detonation, LIA® measures the extent and depth of the released slab.

To monitor the avalanche activity day and night six GINA®‘s were installed in the upper and lower parts of the avalanche path. GINA® detects the ground vibrations an avalanche creates when moving downslope and can detect natural as well as controlled avalanches.

Webcam at the counter slope

A web-based camera was installed at the counter slope and allows for visual confirmation of avalanche control and the conditions in the release area.

Everything on one platform – User interface WAC.3®

All information is combined on a single platform – the web-based Wyssen Avalanche Control Center WAC.3® – and are visualized in a simple and efficient way for the operator.

Read more about the project in Davos (CH):